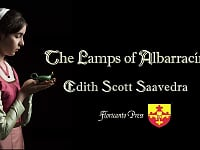 The Lamps of Albarracín (in Spanish, Los Candiles de Albarracín) is a fictional first person narrative by a Sephardic girl that recounts the arrival of the Spanish Inquisition into the Kingdom of Aragon in the 1480's.

This novel tells the true story of a city's resistance to the arrival of King Ferdinand's inquisitor, long

suppressed by the Spanish Monarchy and Church. A woman's narrative, the text brings alive the

historical figure of Brianda de Besante, an unsung heroine of resistance to the Inquisition. It also brings alive the multicultural Spain of the early Renaissance -- religion, spirituality, arts and crafts, houses of worship, songs and ballads, recipes and fashion.